A political commentary? What the heck! In this picture: here, the natural rolling force of the blue river and vegetation is contained and framed by the rigid red. Red states and blue states caught in a balance of opposites. Each makes sense only when the other is present. At least in a political tale! Truth is, the blue was here long long ago before there were borders and boundaries and human thoughts of right and wrong, this and that, red and blue. Blue will remain when we are dust. Put that in your pipe and smoke it!

This will probably be my last post for 2011.
Happy New Year to you. I hope you stay safe and that you get outside a little and try to appreciate the immensity of the natural world just outside your safe little doorstep!
Bonne annèe et bonne santè!
Posted by Rob Dunlavey at 10:28 AM No comments: Links to this post 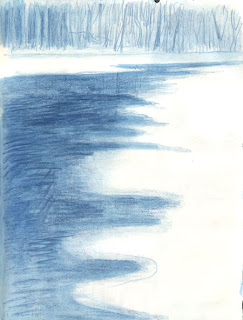 2011 is almost over. Kaput! Fini! The End! "That's all she wrote!"
One year ago the river looked like this (see right): Ice covered most of the channel upstream. And snow covered that ice. On Dec. 27th 2010 I agonized over the predicament of a swan mired in the slushy ice late in the day (If you follow that link, you'll learn that the swan was okay).

This year, there is no snow and only a little bit of ice in the quieter places near the riverbanks. Overall, the river has been high for months. It's not been dreadful but I think it drove the mallard and merganser families away. And I haven't seen the heron since late-September.

I love the sound of the water roaring over the dam but there is something soothing in the stillness of things being frozen and locked away until Spring comes knocking. Maybe this winter will continue to be a roller-coaster ride or maybe the days will just flow along despite any anxiety I might manufacture or feel.

So, what would you do while you wait for winter to settle? Why wait at all? Indeed, I think I will continue to simply attend to it all come what may.

Posted by Rob Dunlavey at 1:16 PM No comments: Links to this post

This is the time of year, where I live, that bird's nests become visible. The leaves are off the trees and each Autumn rain and clarifying Winter cold spell serve to make the branches more stark. Additions like nests become visible and can be seen high and low, casual and definite.
It is remarkable how sturdy they are. In this case, grasses and mud are the primary materials. It is snugged down into the fork of a small maple tree. The rains will slowly wash it away but fragments may remain on into next spring.

I think the hanging gauzy nests of the Northern Oriole are the most impressive. The nest is a kind of sac that hangs pendulum-like. It is merely "woven" from stems and blades of grass and is about eight inches long, maybe longer. The babies fledge in July I guess, and the nest is abandoned having served its purpose. But there it may swing and twist through the winter gales and ice storms of February. This is another promise of Orioles and Summer warmth to return.
Posted by Rob Dunlavey at 12:02 AM No comments: Links to this post 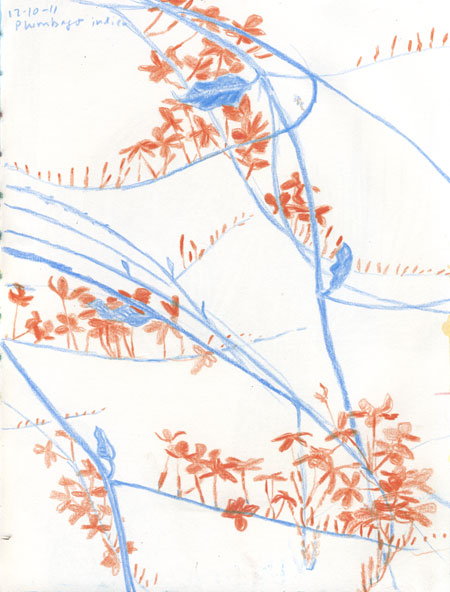 Such colorful vines! I walked into the greenhouse and never made it out of the first room. This Plumbago indica plant caught my eye. My drawing is blue and red but really, this species is a deep pink and the leaves are green.
It's quite nasty if you eat it with your mouth so best to simply devour it with your eyes!


Posted by Rob Dunlavey at 8:36 PM No comments: Links to this post


Posted by Rob Dunlavey at 11:03 AM No comments: Links to this post 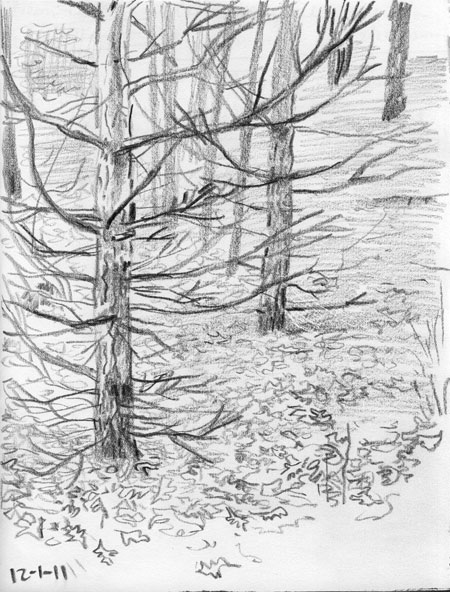 For what it's worth, I've been reading and greatly enjoying "Kenzan and His Tradition" by Bernard Leach. Published in 1966, this book describes the artistic traditions that informed the practice of Ogata Kenzan who developed a uniquely Japanese approach to ceramic decoration in the late 1600 - early 1700's. The influence and importance of Kenzan's "Tradition" is similar to the breakthroughs in European art by the better-known masters of the Italian renaissance. Leach's argument is that, while being in a completely different form of art, Kenzan's accomplishment of fusing an artistic response to cultural, social, political and religious realities was just as groundbreaking and that it continues to influence how we think and feel. His art changed the world. It accomplished this by the force of Kenzan's integrity and his focus on tradition and his unique sensitivity to the cultural winds that were stirring in his lifetime. In 2004, the Miho Museum near Kyoto held an exhibition of Kenzan's work, life and times.

And Leach's writing has a completeness and clarity that beautifully describes a very different historical culture. This alone is a good reason to read "Kenzan and His Tradition". It has slowed me down and allowed me to witness the lives of real people unfolding through time. The best parts are the connections he weaves between individuals with many different aims and agendas. Some are theoretical (because this is a work of scholarship) and others are well documented. But what does any of this have to do with my landscape drawings of 21st century suburban Boston?

I include my drawing of some small pine tree trunks with this description of Leach's book because it coincides with my reading and that, if you can be sympathetic enough, it shows the influence Japanese art, or Asian as I barely understand it, has had on my practice at the moment. While being a timeless type of nature study, for me this drawing is a poetic reflection on an exact moment of my existence. I stood in the cold with frozen fingers and produced a drawing of what I looked at. The trees captured a part of my imagination that is too tangled to describe. It was  a meditative moment with a specific task that needed to be accomplished. At different times, several people walked by, walking their dogs. We exchanged greetings. The dogs sniffed my offered hand. I drew until it became uncomfortable and went home.

Why do this? Why do this now? If you must know, it brings me peace and a momentary focus on something that is not imaginary. My thought process whirs along and I observe it while trying to create a reasonable facsimile of what I am looking at. This is what happens when one is making a picture. The drawing hardly matters. After a while it simply becomes a testimony to my having sat with something and regarded it closely and with affection. I think this is a good reason to make Art.
Posted by Rob Dunlavey at 8:09 AM No comments: Links to this post 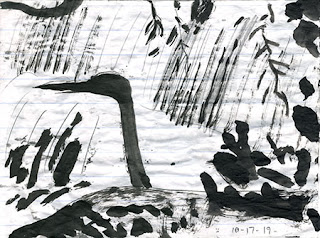